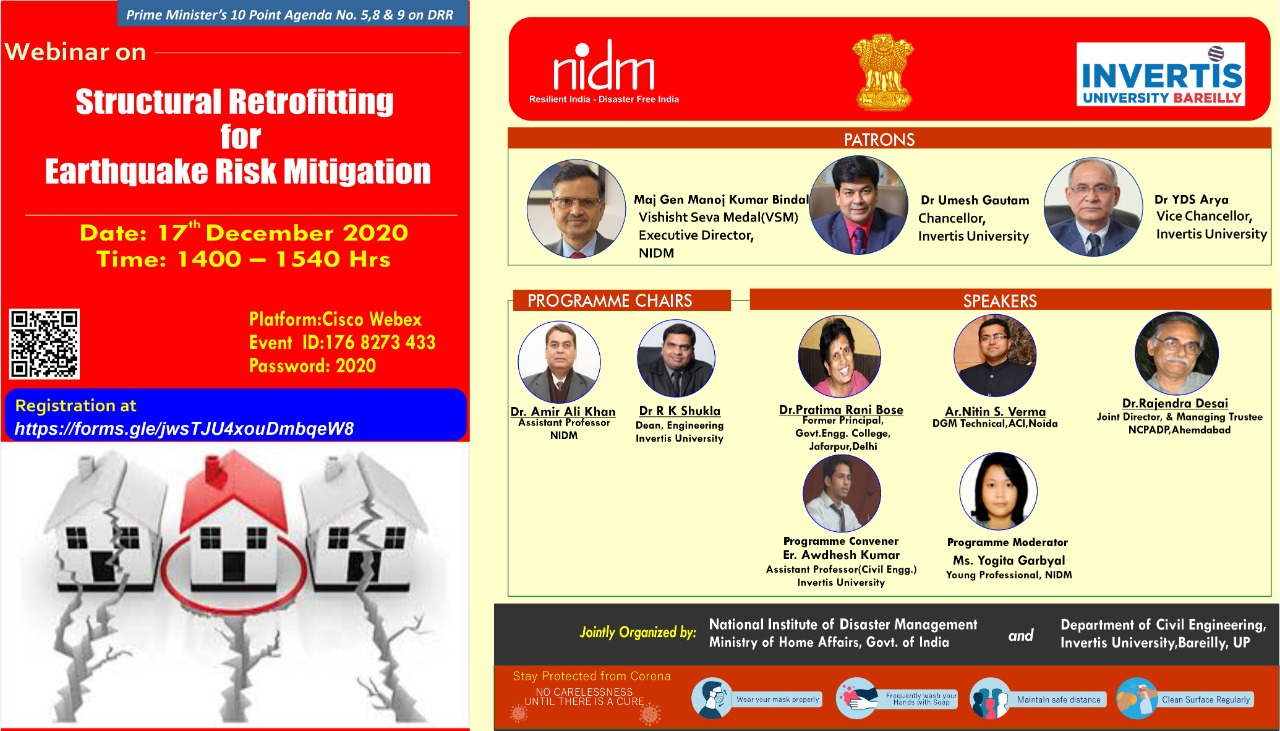 National Institute of Disaster Management (NIDM), New Delhi and Department of Civil Engineering, Invertis University Bareilly, U.P. are jointly organizing the Sixth Webinar on Structural Retrofitting for Earthquake Risk Mitigation. NIDM, Ministry of Home Affairs, Government of India, is a premium institute and a Statutory Body (under Disaster Management Act 2005) for training, research, documentation, awareness and human resources and capacity development in the field of disaster mitigation and management. Disasters, either natural or man-made, have a severe impact on the individual society to the whole nation. The Indian subcontinent has a history of devastating earthquakes. The major reason for the high frequency and intensity of the earthquakes is that the Indian plate is driving into Asia at a rate of approximately 47 mm/year. Geographical statistics of India show that almost 57% of the land is vulnerable to earthquakes, of these about 12% is vulnerable to severe earthquake, After the earthquake in Bhuj, Gujarat in 2001, there has been a concerted effort to address the seismic vulnerability of existing buildings in India, huge devastation established the fact that the earthquake don’t kill the people but a poorly designed building Inspecting the aftermath of earthquakes throughout the developing world, I’ve seen a lot of collapsed buildings that were made of unreinforced masonry. Most of the people that died during these earthquakes were killed because of such poorly constructed buildings hence it’s a widely accepted fact that Fatalities from earthquakes are a man-made problem so there has to be a man-made solution.

Seismic retrofitting is the modification of existing structures to make them more resistant to seismic activity, ground motion, or soil failure due to earthquakes. With better understanding of seismic demand on structures and with our recent experiences with large earthquakes near urban centers, the need of seismic retrofitting is well acknowledged. Retrofitting is needed where the assessment of structural capacity of the building indicates insufficient capacity to resist the forces of expected earthquake intensity and the ensuing damage is likely to exceed the acceptable limits. The objective of holding this webinar is to disseminate information about earthquake retrofitting for disaster mitigation & resilient development among the participants/delegates & also create awareness about the seismic retrofitting design & construction in the society, Participants will be provided with authorized e- certificates.